Located 20 miles north of Indianapolis, Carmel is the fifth-largest city in the state of Indiana. The city is known for its thriving cultural life and is home of the sumptuous Palladium Center for the Performing Arts. From June 2014 onward, the city drew students and professionals from around the world to the annual youth piano competition under the title of “Carmel Klavier International Piano Competition for Young Artists” founded by well-known pedagogue, author of children’s piano book “Tales of Musical Journey” Irina Gorin and Liz Seidel. 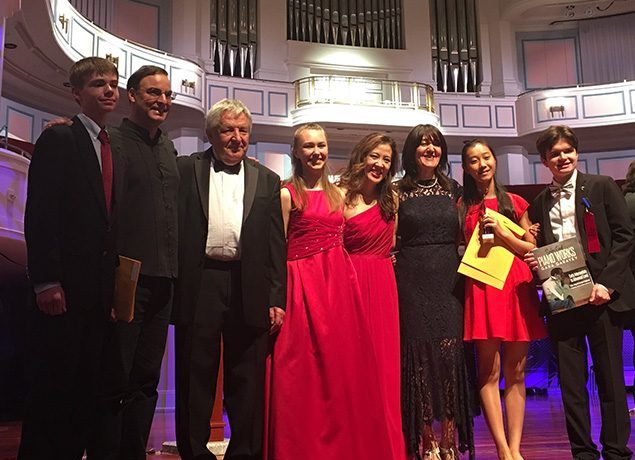 Jury Members Pawel Checinski, Aviram Reichert, Phoenix Park-Kim, Executive Director of the AAMF Dr. Jamila Javadova-Spitzberg and award-winning students
1st Prize Winner
Isaac Qian
2018 marked the 5th year of this contest. It took place at the Tarkington theater studios with the grand closing award ceremony and a gala concert held at the impressive Palladium hall between June 27th and July 1st. The contest attracted 200 young artists from around the globe. They were challenged in multiple categories that included solo, duet, ensemble, concerto and contemporary music performances. Students from Europe, Asia, Latin America, and the USA gathered together to show their tireless commitment to achieve an exceptional artistic expression through piano performance. All finalists received music scholarships, with cumulative awards totaling $20,000.

This year the Carmel Klavier Competition began its first year of collaboration with the Azerbaijan-American Music Foundation. The organizational committee of the competition led by president Irina Gorin extended their invitation to include piano works of the outstanding Azerbaijani composer Gara Garayev into the program of the competition as a featured composer in the contemporary music category. The first American publication of Garayev’s Selected Piano Works originated by Dr. Jamila Javadova-Spitzberg became the official publication of the competition.

Edited by the composer’s daughter Zuleyha Garayeva-Bagirova, it marks a historical significance as the first publication started in the USA. It is noteworthy to mention that the book includes a musical illustration of the entire publication recorded by people’s artist of Azerbaijan Murad Adigezalov and available to book holders on the Azerbaijan-American Music Foundation website. (aamfusa.org)