GARA GARAYEV also spelled as KARA KARAYEV (1918 - 1982) was one of the most eminent and leading composers of Azerbaijan. His compositional art has received a wide recognition, both in Azerbaijan and far beyond its borders and gained a worldwide fame. 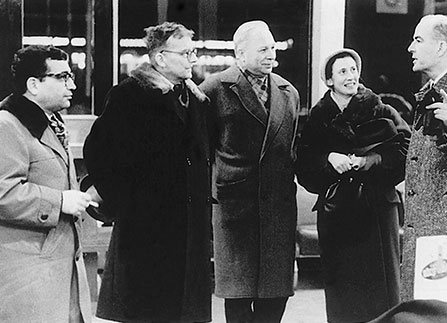 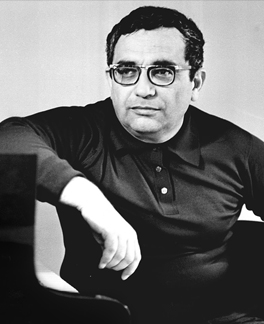 Gara Garayev with D. Schostakovich, I. Martinov, and S. Barber (Moscow, 1962)
Gara Garayev (1918-1982)
Garayev’s impact on the Azerbaijani national symphonic, chamber-instrumental and vocal genres, film music, and the opera and ballet were tremendous. His famous Seven Beauties and The Path of Thunder ballets, 24 Piano Preludes, Don Quixote Symphonic Engravings, Violin Sonata and many other works are masterpieces.

Garayev’s music is authentic and sincere. His music rooted in the traditions of the Azerbaijani folk. The composer was drawn to the art of mugham (a complex art form based on musical improvisation in specific modes) and art of ashiqs (medieval art that combined poetry and music). The impact of studies of the folk music with the eminent Uzeir Hajibeyov, founder of the classical music of Azerbaijan is clear. In addition, Garayev expands the national-thematic and genre framework of Azerbaijani music. The composer takes an unceasing, bold, innovative approach to the traditions, combines western and eastern practices, moves towards further developments and explorations. 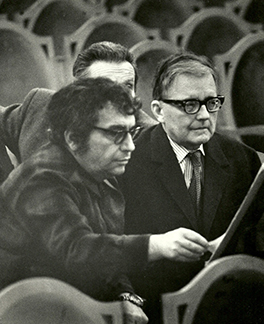 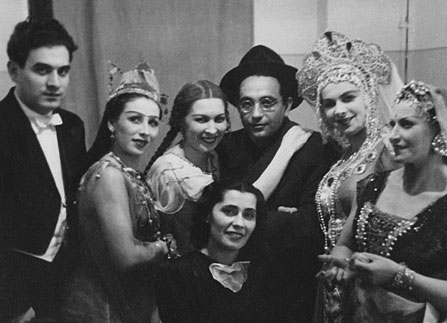 Gara Garayev and Dmitri Schostakovich (Moscow, 1972)
After the premiere of the ballet Seven Beauties (Baku, 1952)
Between 1933-1938, Gara Garayev studied composition and folk music at the Azerbaijan State Conservatory. In 1938, he continued his studies in the Moscow Conservatory, named after P. I. Tchaikovsky. Initially, he studied composition with A. Alexandrov and then later in 1943 with legendary Dmitri Shostakovich (1906-1975). This fortunate union between D. Shostakovich and G. Garayev turned into a lifelong friendship, collaboration, and mentorship.

Garayev emerged as a groundbreaking twentieth-century modern composer, whose works appeared in many concert halls of the world, including countries of the former Soviet Union, Europe, and the United States. During the cold war in June 1961, Gara Garayev and Tikhon Khrennikov were the only two Soviet composers attending the first International Music Festival at the University of California in Los Angeles. Among other invitees was a legendary Igor Stravinsky. Garayev’s Suite from The Path of Thunder ballet was performed under the baton of twelve-time Academy Award nominee and founder of the festival Franz Waxman. 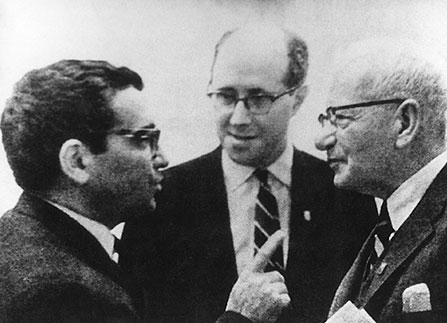 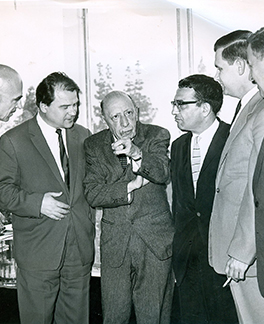 Gara Garayev with M. Rostropovich and E. Zimbalist (Moscow, 1962)
Gara Garayev with I. Stravinsky, N. Bolin, T. Khrennikov,
I. Bezrodny, and B. Yarustovsky (Los Angeles, 1961)
Upon his return from Moscow to Baku, Garayev continued to write music zealously and conduct. He also became a dedicated teacher, pushing the boundaries of the Azerbaijani compositional school towards new and modern horizons. Between 1949-1953, Garayev served as the Dean of the Azerbaijan State Conservatory and from 1965-1982, as the Chairman of the Union of Azerbaijan Composers, as well as Secretary of the Union of USSR Composers.

From folk music to twelve-tone technique, to jazz, the music of Garayev presents it all. Although Garayev was a composer of the twentieth century, his music is not without its hint to the Romantic era music. Some call him the Romantic composer of the twentieth century. The distinct architecture of Garayev works, the beauty of his melodies, and the innovative harmonic and orchestral language of his music are striking. In addition, the unforgettable palette and richness of his music touch a wide spectrum of human emotions, as his works express love and struggle, joy and sadness, humor and drama, dreaming and reality. Garayev moved with time, he felt the pulse, inspired his listeners and rose to the top.
DONATE