On May 30, 2020, the Azerbaijan-American Music Foundation (AAMF) gathered virtually to celebrate the 102nd Anniversary of the Azerbaijan Democratic Republic. The foundation set up a jazz concert program titled "Lunch with Emil," featuring renowned pianist Emil Afrasiyab and singer Leyla Babayeva-Afrasiyab. "Lunch with Emil" comprised original compositions by Emil Afrasiyab, folk songs' arrangements, and Azerbaijani composers' works such as Tofig Guliyev, Farkhad Badalbleyli, Rauf Hajiyev, Vagif Mustafazade, and others. In Leyla Babayeva-Afrasiyab'sperformance, the virtual audience had the pleasure of listening to famous Azerbaijani songs such as "Na Baxtiyardir," by Ibrahim Topchubashev, "Yol Ayrijinda" and "Tez Gal" by Tofig Guliyev. The singer possesses a distinct and rich voice with a soothing timbre that appealed to listeners and fans. Emil Afrasiyab began and ended the program with his original compositions, "Iki Dunya" and "Aziza by Emil." The former piece fuses traditions and cultures of Eastern and Western Music, whereas the latter displays Emil's admiration for the musicianship of Aziza Mustafazade, a famous princess of jazz. 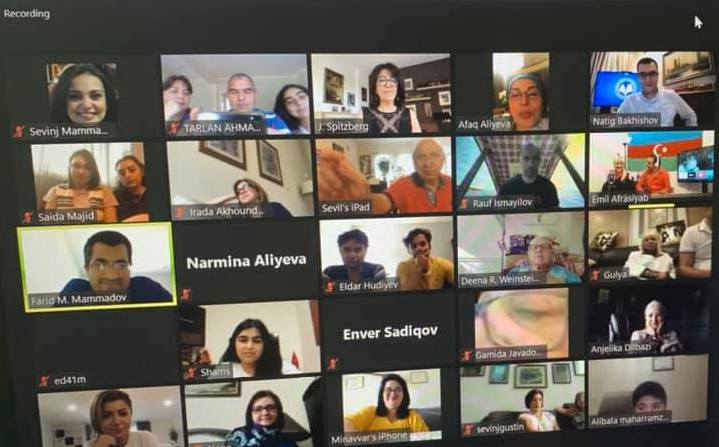 Attendees of the concert
Acclaimed by his colleagues as a "musician of unique talent and dedication," Emil Afrasiyab is currently a student at one of the premier music colleges and performing arts conservatories in the world – Berklee College in Boston, Massachusetts, USA. Emil Afrasiyab received various awards throughout his musical career, among them the highest pianist award at the famous "Montreux Jazz Festival" in Switzerland and an honorary prize at the "Silk Way International Music" festival in Baku, Azerbaijan. Emil is known for his passionate, technically skillful, and intuitive performances. He is well known as the composer and arranger as well.

Among the invitees to the "Lunch with Emil concert" was Azerbaijan's honorary ambassador to the US, Elin Suleymanov, and his wife, Lala Suleymanova. The concert was virtually attended by the Leading Advisor at AR State Committee on Affairs with Diaspora, Lala Ismayilova, Director of the Vagif Mustafazade House Museum, and Vagif Mustafazade Fund Afag Aliyeva, People's Artist of Azerbaijan, Anver Sadikhov, and other honorary guests.