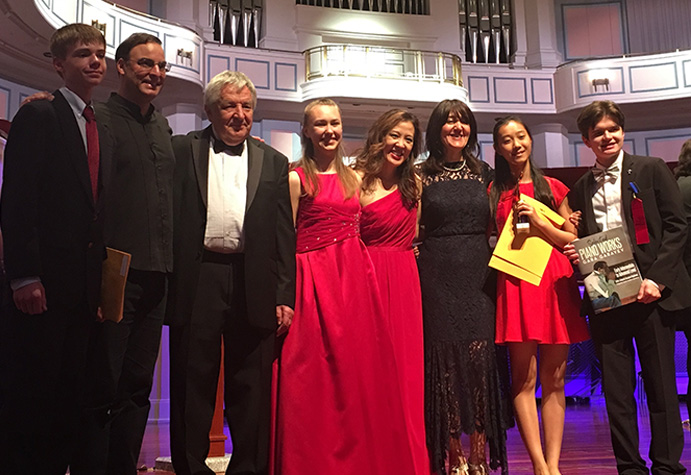 We would like to take the opportunity and end the wonderful 2018 year by launching the AAMF BLOG page on our newly renovated website. We would like to give you a summary of our work done by our team of passionate musicians whose ultimate goal is to make the classical music of Azerbaijan well-known in the USA.

Overall, our 2018 could have been declared as the year of Gara Garayev, since most of our programmes spun and circled around the composer’s glorious music.

Thus, 2018 began by organizing a Jubilee Concert dedicated to the 100-year Anniversary of Gara Garayev, who is one of the most influential Azerbaijani composers. One of the well-known Colleges of Music in the States, the University of North Texas in Denton embraced the idea of celebration. For the occasion, on February 12, 2018, the elegant Voertman Hall of the College of Music hosted well-known musicians consisting of distinguished members of the faculty, and guest artists from the Dallas Symphony orchestra.  It was truly remarkable as many musicians had an exciting time encountering music of the Azerbaijani composer and performing it in front of the appreciative audience. To see the short summary of the concert please visit our UNT Centennial Celebration

The proud moment for the history of our foundation was the publication of Gara Garayev’s Selected Piano Works that came to light in the spring of 2018 that was blessed and edited by the composer’s daughter Zuleycha Garayeva-Baghirova.  The publication is designed for musicians of various age groups and training. It comprises pieces of assorted difficulty from early intermediate to advanced level. The well-known Azerbaijani pianist, People’s Artist Murad Adigezalov recorded the entire publication. The sheet music can be purchased from our website Gara Garayev: First American Publication as well as available on amazon Gara Garayev: Selected Piano Works

In 2018, the International Carmel Klavier Competition for young pianists held in the city of Carmel, Indiana celebrated its 5th anniversary.  This year the competition began collaborating with the Azerbaijan-American Music Foundation. The organizational committee of the competition led by president Irina Gorin extended their invitation to include piano works of the outstanding Azerbaijani composer Gara Garayev into the program of the competition as a featured composer in the contemporary music category. The first American publication of Garayev’s Selected Piano Works became the official publication of the competition. It was a true celebration of the composer’s piano music as kids from all over the world included it into their program. The winner of the first prize became 10-year-old Isaac Qian who performed “A Forgotten Waltz.” It was an elegant and beautiful performance. Thank you, Isaac. Isaac Qian performing “A Forgotten Waltz”

One of the highlights of the year became our sponsorship and support of the “Florida Keys” International Music Competition organized by Pervin Muradova-Dilbazi. The AAMF established the special Jevdet Hajiyev award and a monetary prize for the best performance of works of the eminent Azerbaijani composer. The winner of the first prize and the Jevdet Hajiyev Award of Excellence certificate became Wilson Li who had an opportunity to perform at the prestigious Carnegie Hall in NYC on November 17, 2018. His interpretation of Jevdet Hajiyev’s “Ballade” for piano was engaging and enchanting. We wish Wilson success in his future performances. Here are words of appreciation from Wilson Li. Words of appreciation from Wilson Li

Also, in 2018, the AAMF was able to obtain a copy of the complete program of the 1961 First International Music festival held in Los Angeles, California where the Suite from “The Path of Thunder” ballet of Gara Garayev was performed. This occasion was significant for our history of music. At the time Gara Garayev became the first Soviet-Azerbaijani composer to attend the historic festival led by the American musician Franz Waxman.  Among other invitees were a legendary Igor Stravinsky and Soviet composer Tikhon Khrennikov.  A copy of the program was courtesy of the Special Collections Research Center at Syracuse University Libraries in Syracuse, NY.  We were grateful to our colleagues in Syracuse for responding to our request positively.

Our plans for 2019 are already evolving.  First of all, we are excited to announce that in 2019 the Selected Piano Works of Gara Garayev will be published in Chengdu, China.  We are very grateful for the opportunity as our Asian friends will have a wonderful time learning and playing works of the Azerbaijani composer.

In the upcoming year, we are determined to provide information on classical Azerbaijani musicians who live and work in the US. It is important that the world gets to know them.  We hope to follow their career path and show them our support.

At the end of my blog, I would like to bring the attention of each and every one of you to spread the word about the good our organization determined to do.  We also would like to bring attention to Azerbaijani-American businesses that would be interested in donating to our “musical cause” and become our partners.  We hope we were able to attract some attention and interest.

Finally, we would like to wish you a Happy, Full of Music 2019 Year.  Cheers!