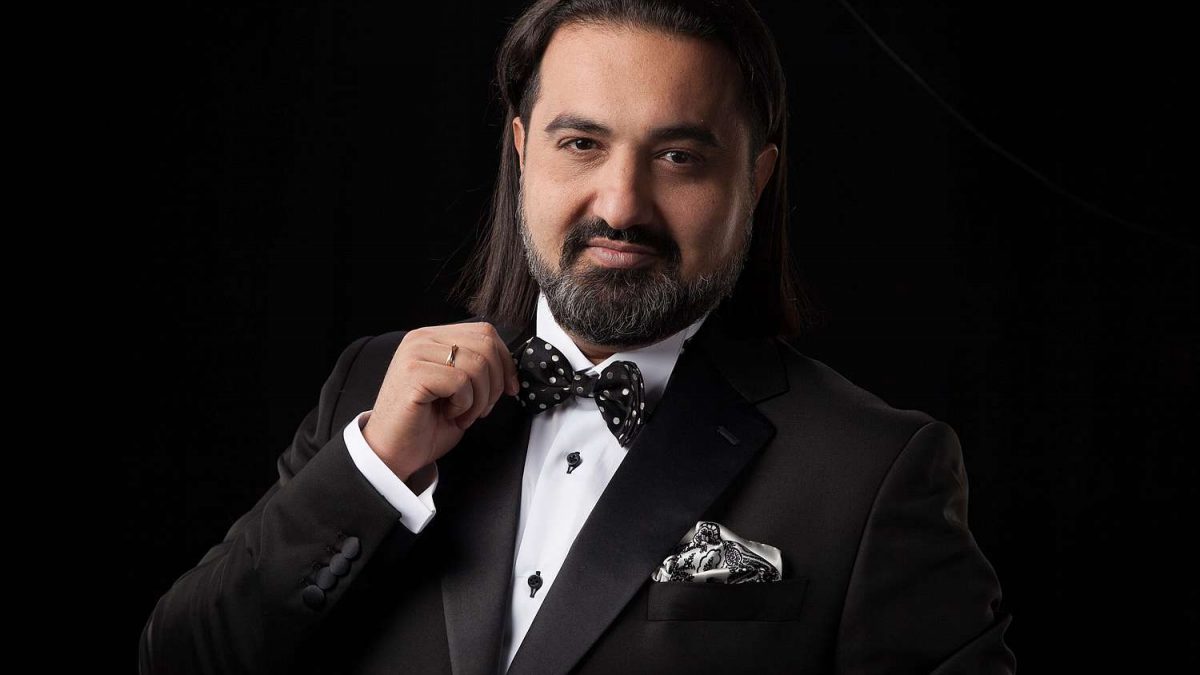 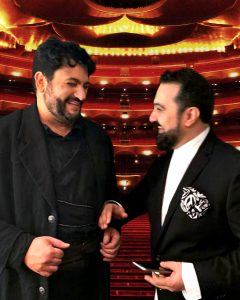 What could Puccini’s La Fanciulla del West and Saint-Saëns’ Samson et Dalila have in common? Italian in its origin, the former lines up with Puccini’s verismo style operas and portrays the life and love story taking place in the American West during the so-called “gold rush” period in the American history.  The latter is the monumental French grand opera based on the biblical story of Hebrew and Philistine conflict.  Both were planned, produced and staged at the Metropolitan Opera at the beginning of the 2018-2019 season, and both attracted an international cast with leading opera voices of the world, including two male singers of the Azerbaijani origin: the tenor Yusif Eyvazov, performing the main character of Dick Johnson in La Fanciulla del West and the baritone Elchin Azizov, singing the role of Abimelech in Samson et Dalila. 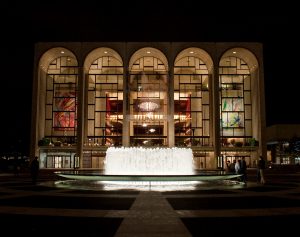 Surely, the nationality of the actors does not have any impact on the Met opera productions nor is the quality of the singing determined by it.  After all, the Metropolitan Opera has always been known for embracing the best of the best from its start.  Examples include the brilliant Swedish soprano Christina Nilsson, the Polish coloratura soprano Marcella Sembrich, the prominent Italian tenor Roberto Stagno and many others who sang during the Met inaugural season in 1883-1884. However, the nationality factor of these two leading voices is compelling for Azerbaijan and its music history, opera in particular.  Especially, considering that the first national opera and opera house in Azerbaijan was produced and built only in the early twentieth century, while the first European public opera house Teatro di San Cassiano opened its doors to viewers in 1637, in Venice.

In 1908, the father of the Azerbaijani classical music, Uzeir Hajibeyli composed the first national opera based on folklore, Leyli and Mejnun, and thus paved a way for unprecedented advancement of the genre not only in the country but the entire Middle East.  The birth of the first opera, construction of the grand edifice – national opera and ballet house in 1911, and later the establishment of the higher musical education school, Azerbaijan State Conservatory in 1920 gave rise to the development of the national opera school.  A galaxy of talented opera singers became pioneers of the Azerbaijani operatic school.  Among them were Ahmed Agdamski, (1884-1953), Huseyngulu Sarabski (1879-1945), Fatma Mukhtarova (1893-1972); Shovkat Mammadova (1897-1981), Bulbul (1897-1961), Sona Aslanova (1924-2011) and others.

With respect to music and music education in particular in the twentieth century Azerbaijan, as a part of the Soviet Union Republics, had advantages of learning from and closely collaborating with the Western classical music schools, mainly of Russia.  One can’t deny the influence of the Soviet musical educational system on the growth of the Azerbaijani classical music, including opera.  Two prominent sopranos, Gasimov sisters, Fidan and Khuraman, manifested the best qualities of the Soviet Azerbaijani opera school by winning prestigious international contests, including the Viotti International Music Competition in Vercelli, Italy (1977); the Maria Callas International Grand Prix competition held in Athens, (1981); the Tchaikovsky International Competition (1982) in Moscow and others.  On the downside, however, the Soviet system didn’t allow many, including the Gasimov sisters, to be fully recognized in the world.  Their talent and success continued to remain in the shadow of the system they worked in.

Only after the irrevocable breakage of the Soviet Union, from the early 1990s onward, mavericks of the Azerbaijani musical culture gained “breathing space” to self-determine their musical destiny and find their own métier.  Voices of Azerbaijani classical singers were spread worldwide, strong and powerful, echoing from the top operatic stages of Teatro Alla Scala in Milan, Bolshoi Theatre in Moscow, the Metropolitan Opera in New York.  This is especially true of Yusif Eyvazov and Elchin Azizov whose career catapulted them onto the prestigious opera stages capturing the attention of opera music critiques and lovers globally. 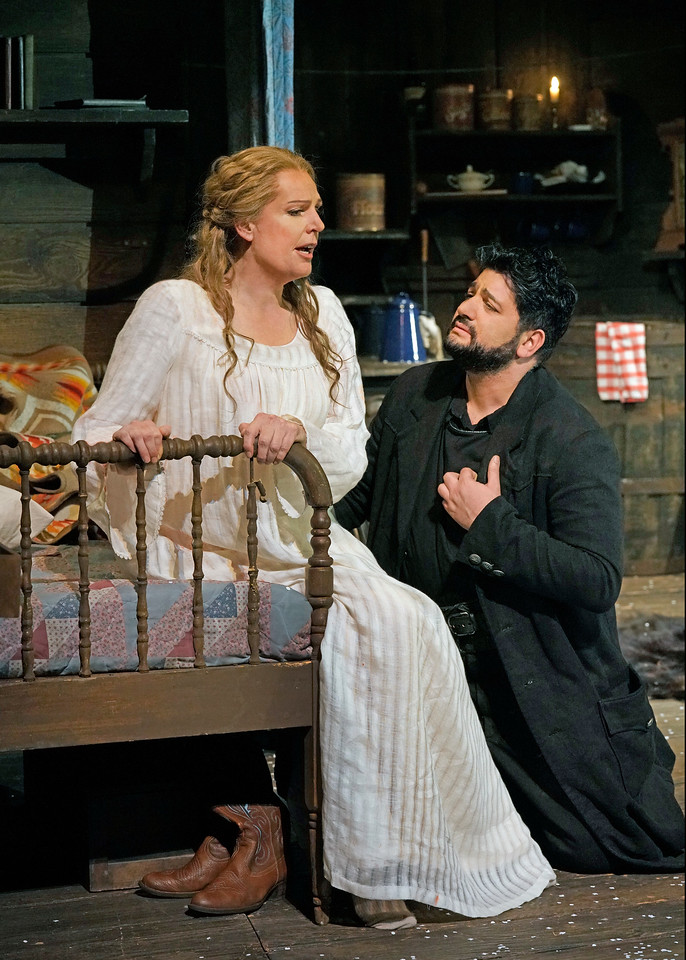 Eyvazov, a dramatic tenor, and Azizov, a deep baritone, are internationally sought-after musicians.  Seeing both of them on the stage of the Met opera, personally to me as Azerbaijani-American and Artistic Director of the Azerbaijan-American Music Foundation was utterly mesmerizing.  It was like witnessing a transformation in history, a performance that could ultimately influence and change the vocal-operatic culture of a small country lying on the outskirts of the Caucasus Mountain.

After the October 2018 performances of the Puccini’s La Fanciulla del West and Saint-Saëns’ Samson et Dalila, I had an opportunity to meet and congratulate both singers on their success.  It was a pleasure seeing the uncompromising Met audiences and stern opera critics showering singers with praise.  For his performance in Samson et Dalila, baritone Elchin Azizov was hailed for “thundering impressively as the doomed Abimelech.” (https://parterre.com/2018/09/25/shorn-yesterday/.  Yusif Eyvazov was praised as Dick Johnson, a role that was once sung by the legendary Enrico Caruso, for “hitting all the right notes quite potently and assuredly and handling the more challenging second and third Act magnificently.” http://operawire.com/metropolitan-opera-2018-19-review-la-fanciulla-del-west/

In January, Elichin Azizov performed his second role of the 2018-2019 season, this time as Ibn-Hakia, a physician to the blind princess in Tchaikovsky’s Iolanta. 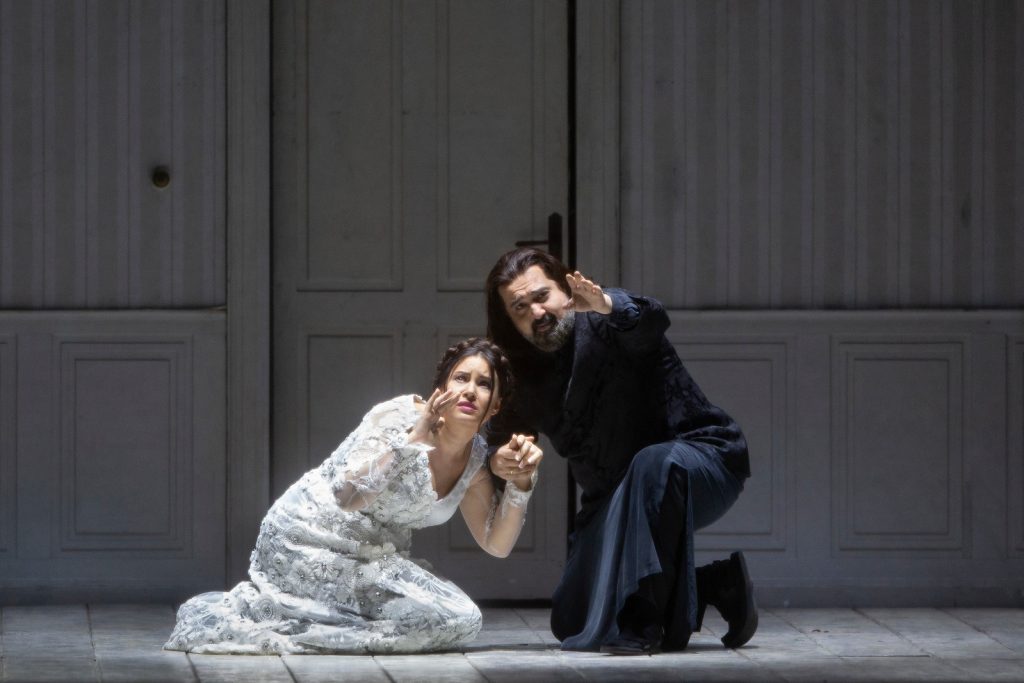 One of the beloved stage characters of Azizov, Ibn-Hakia brought much fame to the celebrated singer.  With this role, Azizov made his remarkable 2008 Bolshoi Theater as well as the 2015 Met opera debuts that attracted much attention.  Many opera fans came to know Azizov as “Iolanta’s doctor.”  The role brought with it a lot of opportunities, including collaboration with conductor Valery Gergiev, partnering with the opera diva Anna Netrebko, working with the production director Mariusz Trelinski and others.  Azizov himself talks about the Ibn-Hakia role with much warmth.  “It is a stage character that accompanies me through my musical life and lives in me. We will never fail each other. This is why I full-heartedly welcomed the invitation to perform it on the stage of the Metropolitan. I knew it will be successful” asserts the baritone. 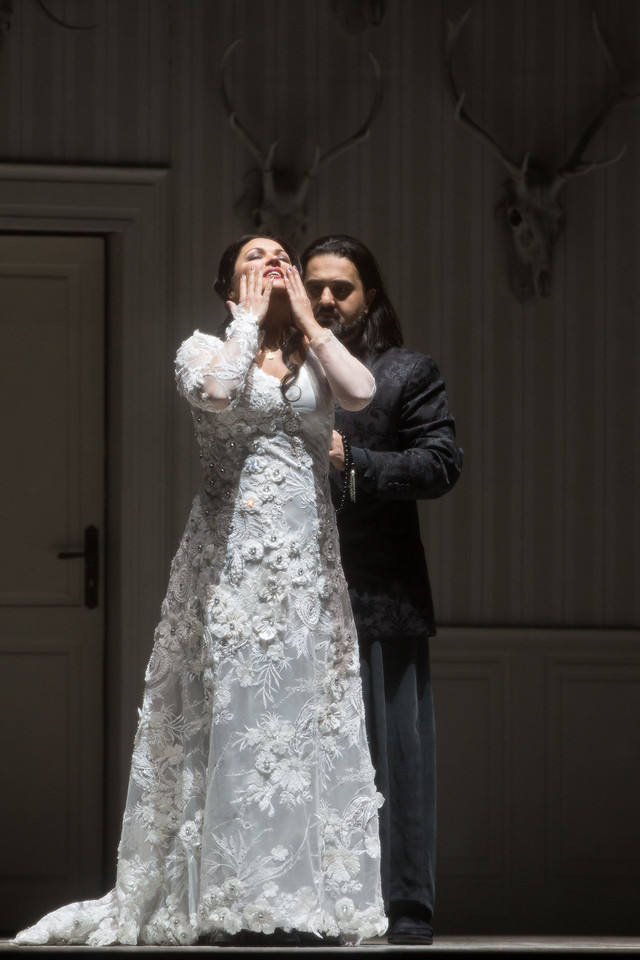 Working with Mariusz Trelinski on the 2015 debut performance and four years later on the 2019 production was a thrilling experience for Azizov.  Trelisinki’s artistic vision for one-act operas and his idea of pairing Tchaikovsky’s Iolanta with Bartók’s Bluebeard’s Castle on stage fascinated and energized Azizov.  It is notable that, both Trelinski and Azizov began their creative careers as film directors. The rigorous attention to detail was a strong connecting point between the two. “This side of Trelinski inspired me to work even harder and practice a lot.  I am fond of practicing, a lot of rehearsing” stated Azizov.

The Azerbaijani baritone has an incredibly powerful voice.  The role of Philistine king Abimelech in Saint-Saëns’ Samson et Dalila with its wicked and Herculean character requires a big voice and was a perfect match for Azizov.  Based on the story of Samson and Delilah in the Old Testament, the opera together with Charles Gounod’s Faust and Georges Bizet’s Carmen remains the most popular opera in the French repertory.  No wonder, the Met opera decided to open the 134th(2018-2019) season with the new grand production of it directed by Tony Award-winning director Darko Tresnjak.  Along with the set designer Alexander Dodge and costume designer Linda Cho, Tresnjak was able to create an opulent oriental spectacle using exotic costumes, pillars, arches, towers, and torches depicting an image of the true Middle East.  Overall, the role of Abimelech in the opera is small yet significant.  Abimelech taunts the Hebrews for being incapacitated and claims dominance.

The Hebrew Samson urges his people to revolt and leads them to triumph by killing Abimelech with the sword.  Azizov’s momentary appearance on the stage created a portentous grandiosity.  His singing was clear, authentic, and memorable. “As the former film director, I knew in fact that even the smallest roles can leave a very vivid impression, therefore, the invitation to be part of the gala opening performance in 2018 was very humbling to me, probably a dream of every opera singer,” says Azizov.  Vocally speaking, the singer was very comfortable with the role of Abimelech. However, for him the most difficult part of the prepping process was “perfecting the French language, achieving a better diction and pronunciation” which was ultimately mastered very well. A live simulcast of the gala opening performance was broadcasted to Times Square with Azizov’s robust performance at the opening act gushing out from the screen.  I must say, a truly proud moment for Azerbaijanis worldwide. 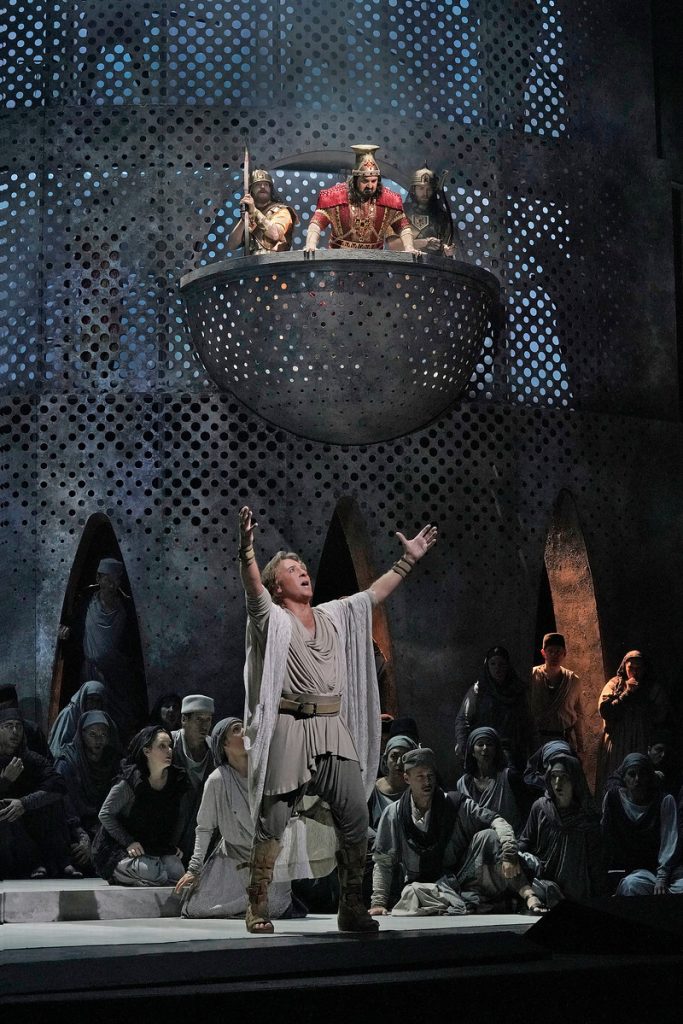 Azizov’s international career continues to evolve spreading to many other stages around the world.  His roles include Lescaut in Puccini’s Manon Lescaut, Giorgio Germont in Verdi’s La Traviata, Rodrigo in Verdi’s Don Carlo and Escamillo in Bizet’s Carmen.  The baritone received worldwide acknowledgments for the title role of Verdi’s Macbeth at Festival d’Opéra, Lyon, Carlo Gérard in Giordano’s Andrea Chénierat the Hungarian State Opera, and Scarpia in Puccini’s Tosca at Ópera Nacional de Chile.  Performing at the Verdi Gala concert programs staged in Moscow’s Bolshoi and Baden-Baden’s Festspielhaus, Germany’s largest opera and concert house, and sharing stage with soprano Anna Netrebko, tenor Yusif Eyvazov, mezzo-soprano Dolora Zajick was an enduring experience for Azizov himself and his opera fan

Azizov finds Verdi operas to be close to his soul with their beautiful and soaring melodies.  He jokes about Verdi “being his composer and writing for him.” 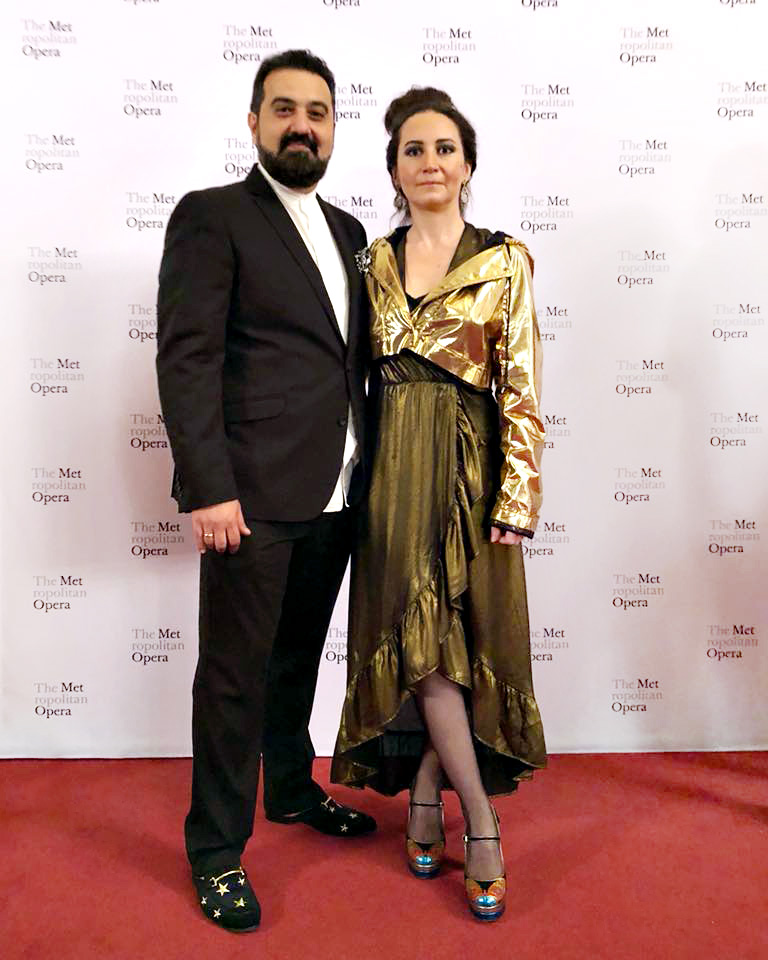 To our curiosity about roles in Wagner’s monumental operas, Azizov responded sincerely by saying, “vocally and psychologically I don’t consider myself ready to perform roles in dramatic operas of Wagner but rather I wish to focus on several other Verdi operas, including the title role in Verdi’s Nabucco.  There is so much out there and I look forward to exploring, learning, rehearsing and performing.”Despite his busy schedule Elchin Azizov continues to hold strong ties to Azerbaijan.  About a year ago he received an honorable title of People’s Artist of Azerbaijan.  On May 12, 2019, Azizov along with Yusif Eyvazov and Anna Netrebko sang in a concert program titled With love for Azerbaijan.  He deeply cares about the young generation of Azerbaijani singers and has useful advice to those who are self-searching by saying “most importantly never give up.  If you personally don’t like and aren’t satisfied with your performance, don’t expect others to like it.  Rather work more, work hard and believe in your success.” 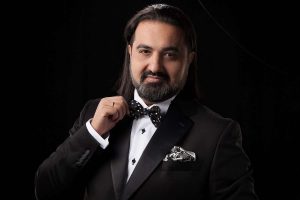