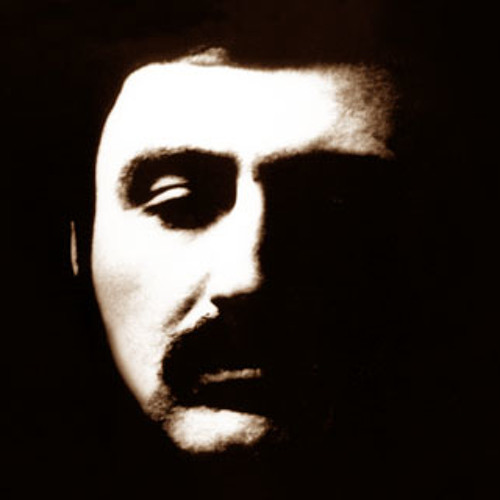 Mid-2001, I said goodbye to my favorite city of Amsterdam, The Netherlands where I lived from 1997 and successfully landed in North Texas, USA.  This intercontinental move was due to my wish to continue my education at the College of Music of the University of North Texas where I pursued a Doctor of Musical Arts degree in organ performance.

Noted for its outstanding music programs overall, the UNT’s College of Music is particularly known for its internationally praised division of jazz studies and critically acclaimed, seven-time Grammy Award Nominee One O’Clock Jazz Lab Band.  They are truly unbeatable!  UNT is also known for offering an outstanding music research library, a preferred study-space for students, especially doctoral.  I remember spending endless hours at the Willis music library, reading, writing and listening to an abundant collection of music materials available to us. 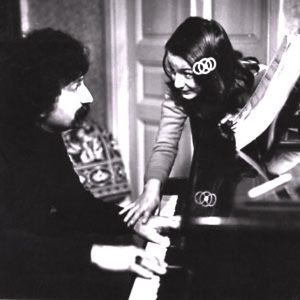 V. Mustafazade with his daughter Aziza

One day as I got to the library to do my “research chores,” a librarian Susannah Cleveland (current Head, Music Library) approached me and asked if I knew the well-known female jazz singer and pianist from Azerbaijan whose name she couldn’t remember.  She went to explain that someone came in from the jazz studies division and asked if the Willis library possessed a CD of her performances. Susannah hoped to get some help from me since at the time, I was the only Azerbaijani student studying at the College of Music.  It didn’t take much time for me to figure out the name of the “incognito jazz singer” from Azerbaijan.  My eyes sparkled and shouted out the name of Aziza, Aziza Mustafa Zadeh, a daughter of the legendary Azerbaijani composer and pianist Vagif Mustafazadeh (1940 –1979). The next day I proudly presented my gift, Aziza’s album called “Seventh Truth” to the Willis Library.  This CD was released in April of 1996 by Columbia Records and consisted of Azerbaijani folk song arrangements, her compositions, and works of her late father.  It was Aziza’s fourth album with 2,000,000 copies sold worldwide. Today, Aziza Mustafazadeh is a super-star who collaborates with jazz musicians of a top caliber such as Stanley Clarke (guitar), John Patitucci (double bass), Bobby Mc Ferrin (vocals) Omar Hakim (drums), and many others.

As I share my humble story about Aziza’s album, my thoughts inadvertently take me away from her and steer me towards her roots, her inspiration, her father, Vagif Mustafazadeh – an extraordinary man with a wondrous destiny in life and music. December 16, 2019, marks the 40th anniversary of the death of this remarkable musician and I felt compelled to talk about him and also wondered where would Vagif be today, what musical heights would he conquer if alive?

A blazing star, Vagif Mustafazadeh lived on earth for a short period only and quickly faded away to eternity.  Like many extraordinary artists Mustafazadeh died too young — in 1979, at the age of just 39.  He was a ceaseless devotee of the art, the art of the jazz piano performance who fundamentally changed the way people listened to, responded and perceived jazz, his jazz music. 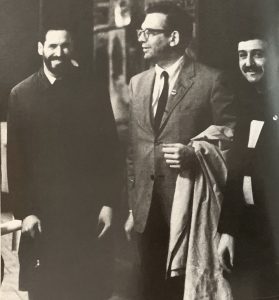 An “architect” and prominent representative of the so-called “Jazz-Mugham” genre and school, Mustafazadeh masterfully fused elements and modal systems (organized scales) of the ancient and highly complex genre of Azerbaijani Mugham with uniquely American jazz that originated in the deep American South, late 19th and early 20th centuries.  Despite the geographical distances and cultural differences between Azerbaijan and North America, and its people, the above-mentioned genres that flourished in these countries shared common features, with the main one being free and soulful improvisation.  For Mustafazadeh it was a heavenly marriage between these two – a medium where his soul was able to dwell.  A fusion of cultures and traditions, creating new colors and shades became a strong starting point, genesis for Mustafazadeh’s art.  “One could feel the influence of ancient melodies yet his music was surprisingly contemporary.” (From Friday, September 22, 1978 radio program “Time for Jazz,” Voice of America “Jazz Hour” by Willis Conover).

One can wonder though how did initially American jazz find its way to a small country of Azerbaijan on the edge of the Caucasus mountains? The answer to this question lies in the geographical location of the country, in people who historically embraced diversity, inclusiveness, cross-culturalism, and the Baku oil/gas boom that attracted a large number of foreigners who brought with them their love for jazz.  However, after the Soviet takeover, especially following the end of WWII, jazz was banned, taken away from its followers, believed to be subordinate to the “grand arts” supported by the communist party.  Anything American, including jazz, was closely controlled and strictly “verboten.”  “No dictatorship could tolerate jazz,” noted the pianist and bandleader Dave Brubeck during his concert in Warsaw, Poland in 1958, which was under the Soviet influence. 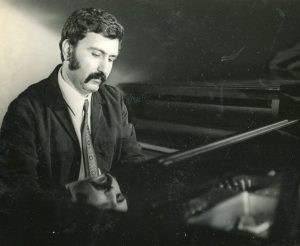 The early years of Mustafazadeh’s growth as a musician (1940 & 1950) coincided with muscular years of the totalitarian regime, when musicians, architects, painters were forced to express their art using principles of Socialist realism, present phony optimistic, propagandist images of political leaders.  It is humbling to realize that in the face of intense censorship many true artists kept resisting and pushing those boundaries because of their love and passion for the craft they believed in.  Mustafazadeh was one of them.  He worked hard to break sturdy walls, and one note at the time captured hearts of hundreds of people, including the most ardent communists, some of whom listened to him behind closed doors. 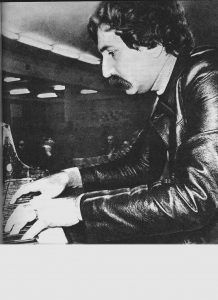 Life was never easy for Vagif.  His unusual sense of music, his desire to make things differently cost him major challenges, struggles, frustrations, and ultimately life.  He was an oddball, and never fit into the stereotype mold of a Soviet musician, pianists.  And then there was the iconic, irresistible mustache, fitted slacks, and the leather jacket!  This too originated from Mustafazadeh’s nonconformist mentality that set him apart from the clean-shaved standard “Soviet looks” and caused him exasperation.

Vagif always looked West, namely America.  His beloved American tune by Gershwin brothers (George + Ira) “The man I love,” which Vagif first performed at the age of 9, continued to move him all through until he died.  He got inspired by exceptional jazz musicians such as pianists Bill Evans (1929 –1980), Ahmad Jamal (1930), and Cecil Taylor (1929 – 2018), jazz saxophonist and composer Charlie Parker (1920 –1955) and others.  While continuing his formal classical piano education, playing works of Bach, Beethoven, Chopin, Rachmaninoff and studying fundamentals of the rich Azerbaijani folk songs and mugham (his mother, pianist Zivar Aliyeva influenced him the most), Mustafazadeh repeatedly tuned in, when he could, to “Jazz Hour,” a radio program, broadcasted by Voice of America’s legendary jazz critic Willis Conover who in turn “admired Mustafazadeh and thought him a superb pianist, most lyrical” after hearing him at the jazz festival in Tallinn, Estonia in 1967.  The American music critic came to Tallinn along with the Charles Lloyd Quartet that included, tenor saxophonist and flutist Charles Lloyd, drummer Jack De Johnette, pianist Keith Jarrett, and bassist Ron McClure.

Mustafazadeh became a man of international fame, a musician par excellence after his participation at several international jazz festivals held in Tallinn, (Estonia, 1966 & 1967) Donezk (Ukraine, 1977), Tbilisi (Georgia, 1978) and Moscow (Russia, 1979).  His largest international success occurred in 1979 when Mustafazadeh won the highest award at the International competition for Jazz Themes in Monte-Carlo, Monaco for his anonymously submitted composition titled “Expecting Aziza” that he recorded with bassist Tamaz Kurashvili and drummer Vladimir Boldyrev.  Alas, he wasn’t destined to “revel in victory” due to sudden death.  The winner’s prize – sumptuous white grand piano went to Mustafazadeh’s family.

In spite of disappointments and politically motivated failures from 1960 onward, Vagif Mustafazadeh continued to advance his career as a jazz musician. In pursuance of better musical opportunities, in 1965 he left for Tbilisi, Georgia where he lived until 1969.  During these years, in Georgia, he joined forces with bassist Tamaz Kurashvili, worked with the ensemble “Orero,” formed the “Caucasus” jazz trio.  Upon his return to Baku, Mustafazade organized and toured with the female vocal-instrumental groups “Leili” (1970) and later “Sevil” (1971).  His final brainchild became the “Mugham” jazz ensemble (1977). Still struggling and longing for recognition on December 16, 1979, during his concert tour to Central Asia, in Tashkent, Uzbekistan Mustfazadeh collapsed on the stage and suffered a massive heart failure. 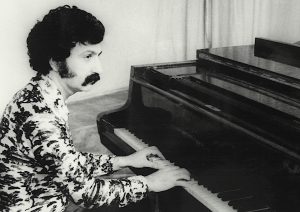 Well-known for his melodic improvisations, lyric style, use of space, and embellishments, pianist and composer Vagif Mustafazadeh left a legacy that opened jazz to interaction and harmonic lavishness well beyond the established standards.  His interest in improvisation rooted in Azerbaijani mugham modes, rather than in traditional sequences of chord progressions made him unique among fellow players around the world.  An innovator, Mustafazadeh left his mark on the generation of jazz musicians to come after him.  He left behind a school – Vagif Mustafazade school that will continue to encourage and inspire his listeners and followers.  I think that the scope of Mustafazadeh’s genius is unattainable. Virtuoso pianist and composer was one of those trailblazers who started a movement that changed history.  Among his unforgettable tunes are: “Solitude,” “March,” “The Caucasus,” “Expecting Aziza” and many others.  He is also the author of the Concerto in Jazz Style for Piano and String Orchestra comprised of three movements. 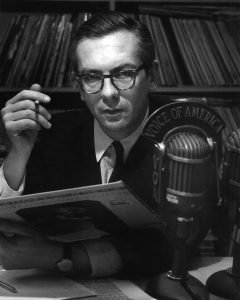 If my readers remember, at the beginning of this article I proudly bragged about my alma mater, University of North Texas and its music library. While working on this article, I vigorously searched for audio files of the well-known radio show of the jazz music critic Willis Conover (1920-1996) who in the 1970s dedicated programs to Vagif Mustafazadeh. One of many legacies of Voice of America’s Conover was to keep jazz alive in countries of Eastern Europe and the Soviet Union during the cold war and also introduce little known musicians of the Eastern block to American listeners.  For more than four decades, Conover became an icon who kept the jazz world scene together by taping and broadcasting his shows from the VOA studio in Washington, D.C.  I can’t describe how excited I became after learning that in 1997 the UNT music library received an invaluable gift from the Willis Conover Jazz Preservation Foundation, Inc. consisting over 22,000 recordings of numerous formats, correspondence, memos, magazines, record catalogs, program notes, photographs, books, and other personal items.  Fortunately for us,  Conover’s September 22, 1978, show dedicated to Vagif Mustafazadeh was among them. Thanks to UNT’s Willis Music library we were able to get hold of this historic recording.  I would like to extend my sincere gratitude to Maristella Feustle, Music Special Collections Librarian for her invaluable assistance in obtaining the Mustafazadeh audio file. The Azerbaijan-American Music Foundation was granted a rare opportunity to publish this recording on pages of our website in 41 years after its release, and I hope you will take time to listen to it.