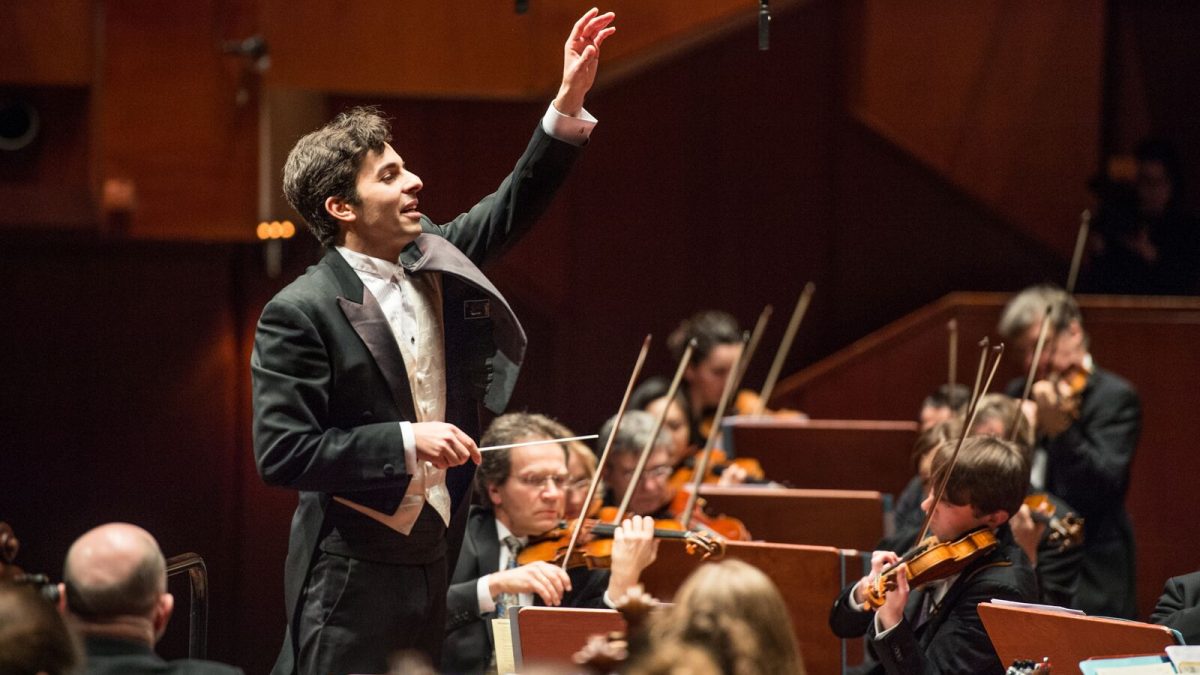 On April 11, 2018, the Youth Symphony Orchestra of Monterey County, California, gave the world premiere performance of the Concerto for Balaban, Percussion Instruments, Piano, and Symphonic Orchestra of the rising Azerbaijani composer Abuzar Manafzade. The idea of having to showcase Azerbaijani national instruments such as balaban (double-reed wind instrument) and nagara, goshanagara (drum-like membranophones), and zarb (goblet drum) in a Western classical orchestral setting along with the piano was remarkable. The concerto premiered under the baton of conductor Farkhad Khudyev who served as the music director of the Youth Symphony Orchestra.  Although unable to attend the live performance, I made sure to follow up on it via YouTube video recording that included an insightful introduction to the piece and musicians by the maestro Khudyev. 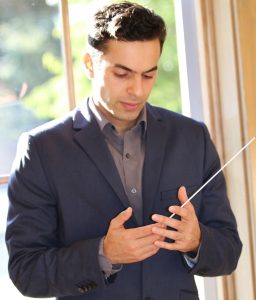 It is how I initially “came into contact” with intelligent and soft-spoken conductor Farkhad Khudyev, whose artistry and talent evoked a lot of interest in me.  I made all the efforts to research his musical biography that turned out to be awe-inspiring.

A talented artist also scored breathtaking victories at various competitions all over the world, both as the violinist and conductor. In 2017, Khudyev landed as number three at the prestigious 8th Sir Georg Solti International Conductors’ Competition held at Alte Oper in Frankfurt, Germany, and then in 2018, received the Solti Foundation U.S. Career Assistance Award given to young conductors in support and encouragement of their careers.

Through these biographical readings and research, in my mind, I built up an image of an accomplished artist who worked hard, was ambitious, possessed a strong drive for excellence and success.  A year later, after the Monterey premiere, I was delighted to hear about Khudyev’s move to Texas as the Assistant Professor of Music in Orchestral Studies at UT Austin.  He was also invited to lead the University of Texas symphony orchestra (UTSO), one of the top college orchestras in the nation.  This development meant new opportunities and exciting performances for the conductor, his followers, UT music students, and school in general.  It also motivated me to hear him live.  Close geographical proximity between cities where maestro Khudyev (Austin, TX) and I (North Texas) worked and lived made it very convenient.  I was ready and determined to meet Farkhad in person. Sunday, November 10, 2019, turned out to be that day!  The UT symphonic orchestra was presenting its second scheduled program of the 2019-2020 academic year that day. 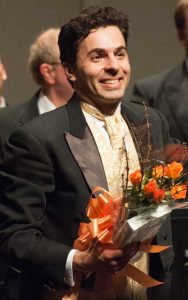 From the very beginning, I was intrigued by the choice of oeuvres of the program.  By looking around, I knew immediately knew that the program caught the imagination and appealed to a broad audience.  A 700-seat Bates Recital Hall designed to accommodate such classical performances was packed.  The program contained the Suite No. 2 from the Azerbaijani composer Gara Garayev’s (1918-1982) The Path of Thunder(1957) ballet in tandem with Shostakovich’s (1906-1975) Fifteenth Symphony in A-major(1971). 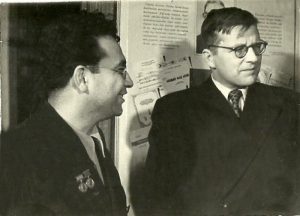 Shostakovich – Garayev, teacher and student associations, collaborations, and friendship facts are well-known in history.  Both composers lived in the twentieth century and represented the Soviet school of music.  Despite the political challenges of their time, composers became very influential, possessed a unique artistic expression, and made an impact on the educational and cultural pathways.  Thus, Khudyev’s choice of the program was well-thought through.  It showed the conductor’s intention to present a cultural program that would bond, educate, and reinvigorate.  Choosing a recital program is a creative process for maestro and “requires a thorough knowledge of not only the repertoire but also the environment that a conductor is working with.” Khudyev spends long hours of thinking about it.  The goal is to “strive to have an invisible connection thread between the pieces on the program.” Finding that sacred thread that “brings to the audiences both the diversity and commonality simultaneously is a challenging process.” He enjoys the task and always “looks forward to it.” 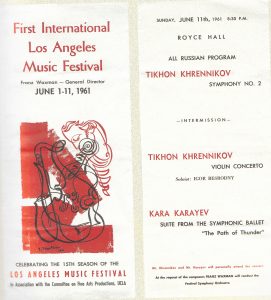 Program of the First International Los Angeles Music Festival of 1961

The November 10 concert presented the premiere performance of Garayev’s ballet in Texas. Hence it was very significant too. (The American premiere performance of The Path of Thunder ballet took place in Los Angeles during the First International Music Festival held at the University of California in Los Angeles in 1961 under the direction of the LA Festival’s founder, Franz Waxman).

The Path of Thunder ballet is based on the novel of the South African prose writer, Peter Abrahams.  It depicts the story of a young mixed-race couple, Lanny and Sarie, who love under the menacing shadow of enforced segregation.  When asked about his choice of Garayev’s ballet for the program, maestro Khudyev emphasized problems depicted in the story that continues to be relevant to our times.  They “speak of racial discrimination, which is an ongoing problem all around the world.  I think it is essential to remind ourselves through this sacred music that diversity and acceptance are the most precious gifts,” says the conductor.  Musically speaking Garayev’s ballet is “very pure and honest and reaches unbelievably beautiful heights” continues maestro.

Khudyev also talks about his love and admiration for the music of the legendary Shostakovich, whose music “speaks of truth and reality in an extraordinary way to the point where music transforms into a transcendental and spiritual experience.” The “most innocent” final symphony of the aging composer is known for its super-abundant use of quotations from Shostakovich’s own and other composer’s works as if he tries to deliver a cryptic subconscious message.  Yet they appear to be masterfully woven into Shostakovich’s symphonic language. The use of Rossini’s William Tell Overture, Richard Wagner’s “Fate leitmotif” from the Ring Cycle, and the famous “Yearning Tristan motif” from the Tristan and Isoldeare among them. Furthermore, one hears references to Mikhail Glinka, Sergei Rachmaninov, and Gustav Mahler in it too.

Watching Khudyev conduct these pieces was a delightful experience.  Maestro’s elegant conducting gestures and floating soft hands led the orchestra skillfully, pinpointing delicate subtleties and fine nuances to orchestra musicians.  The magnetism of indicated expressions was persuasive and kept students genuinely alert throughout.  This performance was characterized by the beauty of sound, enchanting legati, virtuosity, and perfection. 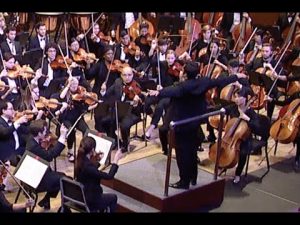 Why did you want to become an orchestral conductor?” I asked Khudyev during our very first meet up after the November 10, 2019 performance?   It turned out that the idea to pursue a career as a conductor had been uncannily growing in violinist Khudyev since childhood.  According to the maestro, it was a “magnificent and organic process.” For a young musician, the idea reached its maturity in his early twenties.  While studying at Oberlin conservatory, Khudyev decided to set up an orchestra and deliver his first conducting debut.  With every passing day, Khudyev began to realize that “his heart and mind yearned for the powerful and magnificent instrument called the orchestra.” “The idea of leading an orchestra and being immersed in its magnitude of diverse sounds and colors fascinated me,” continued maestro. “A conductor bears an extraordinary responsibility to inspire and communicate sincere and virtuous qualities of the world through music.  As I realized that, I knew that there was nothing else that I wanted to do but to take up this wonderful responsibility.” For Khudyev, “leading an orchestra means inspiring, supporting, reliving, and discovering at the same time.” He finds that to be “the most rewarding process that one can be a part of.” 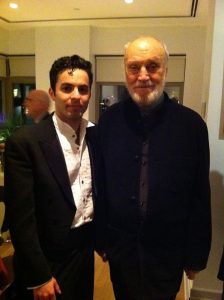 Khudyev with Kurt Masur, former Kapellmeister of the Leipzig Gewandhaus Orchestra, and the music director of the New York Philharmonic.

It is certain that “the most rewarding process” truthfully inspires the maestro, and helps him to craft performances. Across conducting maestro musically enunciate his fondness for the pulse of music, large scale structures, massive energy, unusual sonorities, natural tempos, and expressions. He strives to treasure the uniqueness of every piece.  From the time of his UT Austin appointment, Khudyev set forward an orchestral program that included an impressive array of dazzling and infrequently performed orchestral works.  The Symphony No. 2 in D major Jean Sibelius (1865-1957), a monumental choral symphony The Bells by Russian composer Sergei Rachmaninoff (1873-1943), a rhapsody for orchestra Taras Bulba by Czech composer Leoš Janáček (1854-1928), Symphonic Sketches by one of America’s greatest symphonists, George Chadwick (1854-1931) are among them.

I wondered if Khudyev had a favorite conductor among the well-known masters of the art, one he admired the most.  As fascinating as this sounds, Khudyev emphasized the power of music, which “served as his best-loved conductor.” He tries not to think about the future either and treasures the present. “As a musician, I think it’s important to live in the moment. When one fully lives and indulges at the moment with meaning, one organically creates the future.”